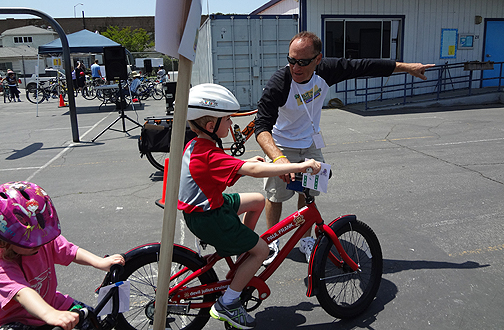 Like so many people, I learned to ride a bike early on and for years, my two wheelers were my primary modes of transportation. Growing up in the San Fernando Valley (just outside of Los Angeles), I would bike everywhere – school, friends’ houses, work, the malls. Everywhere. Perhaps I even took the sense of freedom for granted.

Then I traded in my two wheels for four at the age of 16 when I got my drivers license. It would be almost a decade before I rediscovered the joy of riding regularly again when I was introduced to mountain biking. The thrill of the downhill after the intense workout of the climb was irresistible.

Soon after, I attended a fun ride hosted by CORBA (Concerned Off-Road Bicyclists Association) where I was introduced to policy and multi-use trail access issues. I soon realized how even a little support for a cause you believe in could make a difference.

For many years, my cycling advocacy efforts focused  on mountain biking. But when our daughter entered grade school, my attention turned to urban riding and working to make our community in Culver City safer for cyclists, especially young riders.

In 2010, I attended a Safe Routes to School community meeting in Culver City as a precursor to applying for $1.5 million in state and federal funding intended to provide easier and safer access to a few of the schools here. The process included several stakeholders – parents, educators, city officials and police officers – mapping out a plan to not only encourage children to walk and bike to school more frequently, but provide them safe routes to do so. The consultant left with some great feedback, but the timing was ridiculous – at east two years before we’d see any physical improvements.

This wasn’t the first such meeting I had been to where I left with the same exhilarated but empty feeling. The thought that it would be two years before we would see tangible results in the form of paint on a roadway or a new sign in the ground – assuming we were actually awarded the grant – was disheartening. What the heck were we supposed to do in the meantime? How could we take the energy and enthusiasm from this meeting and turn it into action? What could I do to help NOW?

I started to realize too that individual events like bike rodeos, walking school buses and rolling bike trains are great for introducing kids to basic skills and safety tips, but how do we get them to put it in practice everyday? It became clear we not only needed to encourage the kids in between these events to walk and bike to school more often, but we also needed to provide them the education and tools to do so safely and responsibly.

I did some research and although I found guidelines and tools, I did not find many who were developing ongoing consistent campaigns such as I envisioned. I also discovered a large demand for such programs as well as a desire to find new ways of presenting pedestrian and bicycle safety programs.

Further research showed how badly children need exercise and how a little extra helps them in school, reduces the risk of obesity and diabetes and reduces congestion around schools.  We simply aren’t doing enough to get them – and their parents – out of their cars more often. A simple solution would be to encourage kids to walk and bike to school more often.

So after a lot of soul searching and research, in October, 2012 I took the bold step of starting a new organization – Walk ‘n Rollers. Since that time, we have worked in communities throughout Los Angeles, Orange and Riverside Counties, providing on-campus activities, community events and Safe Routes to School Programming. But there is still so much more to do.